Its aim was to establish a community organisation and build a community centre.  Over 50 years later, that organisation is still going strong and the Milestone Centre became a reality, being opened a little over a decade later and was later added to by a squash centre and the youth and recreation building.

We offer a number of groups to join, some sporting and some more sedate!  We also have the Caversham Park Village Social Club who have pool, darts, big screen sports events, parties or just somewhere to go to meet up for a quiet drink with friends.  See the separate Facebook page for the social club.

January 10, 1964 – Caversham Park model on show – “Next Wednesday, Thursday and Friday an exhibition will be open to the public in the Small Town Hall, Reading, to show people the ideas behind the proposed development to be made at Caversham Park.

A scale-model, constructed by students at Nottingham University under the guidance of Professor Paul Ritter, will be used to explain the ‘Radburn’ system of traffic segregation on which Caversham Park Village will be laid out.

Work has already begun on clearing the ground at the Caversham Park site, which is to be developed as a residential estate by Davis Estates Ltd., over the next five or six years.

Since then, Caversham Park Village has grown to a housing estate of more than 1,500 homes. 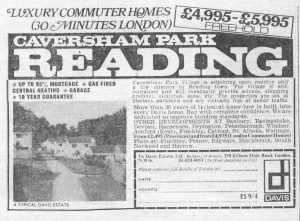 But it wasn’t just the Reading Chornicle covering this new housing estate.  In April 1969, the London Evening Standard was carrying adverts from Davis Estates Limited of 350 Kilburn High Road enticing people to move out to Caversham Park Village and commute back to London (left).

And it worked.  With many people living here and jumping on the train to London each morning as well as those working more locally and quite a few commuting to Heathrow Airport.

So Davis Estates continued with this vision of a new style of housing estate where pedestrians and traffic were safely separated (which is why most roads on the Village have no footpaths alongside them).

With the first parts of the Village being built at “the bottom” (the Henley Road end) and gradually building up Lowfield Road then down from the “top” end (the Peppard Road end).  The first shops appeared at Farnham Drive Shopping Centre (the “bottom shops”) as the photo right, published by GetReading shows.  Anyone remember when Budgen had a branch there, albeit somewhat smaller than the one which remains at the “top shops” today?  And the one at the “top shops” nearly didn’t survive as it had been built a few feet over the approved building line and it’s possible demolition or adjustment was featured on an episode of Nationwide in the very early 1970s (starring the author of this article in a pushchair being pushed across the camera view of the frontage)!

The Dalkeith houses won a design award in the late 1960s and the wooden hut sales office at the bottom of Caversham Park Road regularly had queues outside it with people eager to sign up for plots.  Every house was to have new-fangled cable television served by a communal aerial and piped to each house.  Many houses still have the metal cover over the Rediffusion box on the side of them, and some will still have the channel dial control in the living room, but this meant that ugly television aerials didn’t have to appear on every house.  It didn’t last of course and the communal aerial which used to be situated opposite Caversham Park Primary School was removed some years ago.  Gas fired central heating was another selling point and I’m told by a British Gas engineer that there is at least one of those original boilers still working today (2018).

Windows were a specific feature too.  No window frames to obstruct the views, just two panes of glass overlapping in the middle in wooden grooves kept in place with a small rubber bung and latched by a small metal clip, gave every room a picture window as well as draughts as the rubber bung deteriorated!  Double glazing, as championed by Ted Moult, saw the end of most of those. 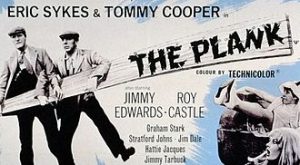 It wasn’t just the architect award panels who had noticed Caversham Park Village.  The silver screen beckoned and in 1967 the late, great Tommy Cooper and Eric Sykes starred in “The Plank”; a film about two blundering builders trying to finish the floor of a house and needing one extra plank.  The house is in Elstow Avenue and is one of those award-winning Dalkeiths with sunken living room floors which didn’t need any planks!  Watch the video below and you’ll see some of the original design features of the Dalkeith houses and  4 minutes and 5 minutes in, the view through the window shows Milestone Way disappearing off down to where the Milestone Centre is now with no sign of Gayhurst Close and Holyrood Close.

Sadly for Davis Estates Limited, things didn’t end well with them going bust before the Village was finished.  The later houses, built in the early 1970s, were built by a different builder and while the styles and density changed, the basic design of segregating pedestrians from traffic remained.

One legacy Davis Estates left were the street names.  It is said that an Englishman’s home is his castle and many of the (original) cul-de-sac names are named after castles, generally in alphabetical order starting at the bottom, then the top and working towards the middle – hence Kingsway and Queensway as two feeder roads.

We know that there are plenty of photos of Caversham Park Village’s earlier days out there and we’d love to see them and publish them here to help expand this page.  If you have any (or any other information to share), please get in touch and let us know.  We’ll also be looking at our own archives to see what else we can share with you.

Caversham Park Village sits within the former grounds of Caversham Park House which extended to include Clayfield Copse, and was, until recently, home to the BBC’s Monitoring Service.  If you’d like to find out more about the Caversham Park house and estate, why not start with the Caversham Park Wikipedia article which contains references to other information sources.

Whether sport, drama, or quiz nights in the bar are your thing, you’ll find a host of opportunities at the Milestone. We also provide a home for great pre- and post-schools and for the Caversham Park Village Residents’ Association. Browse these pages to find out more.